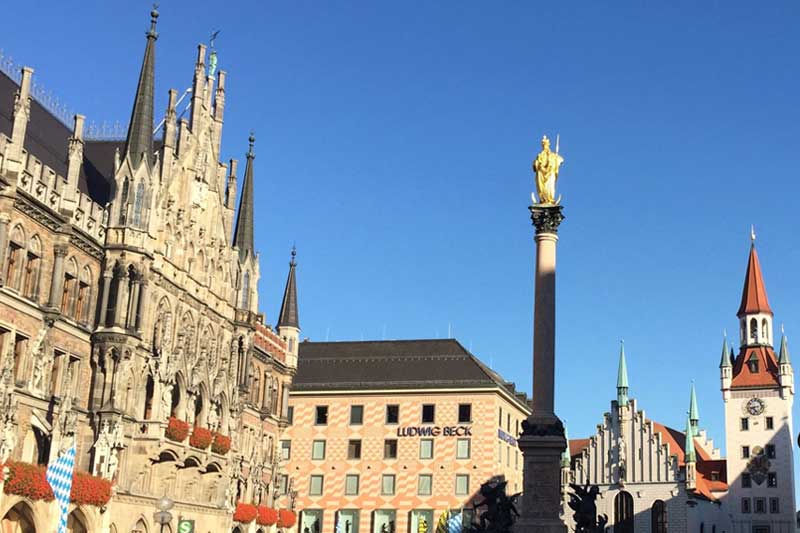 This fascinating and entertaining walking tour of Munich includes the famous Glockenspiel and Hofbräuhaus, Munich’s Nazi past, Schwabing and the English Garden, and modern Munich’s place in enterprise and innovation. Also, there will be some sober stories about beer!

Mary’s Square, Town Halls, Victuals Market, and the Church of Our Lady

We start our walking tour of the sights of Munich on the Marienplatz right in the downtown center of the old city with not one, but two, Town Halls, but which one is older? Around the corner, get your guide to explain how Munich’s iconic Frauenkirche landmark stands without buttresses. One of the tourist things to do in Munich is a visit to the Viktualienmarkt, although we will just pass through to take in other sights of Munich. We will stand under the May Pole to discuss the city’s breweries and the beer purity law, with a wink from Munich’s beloved Charlie Chaplin. We soon introduce ourselves to two gentlemen who did the most the give Munich its elegant style and appearance.

Synagogue, Assam’s, Maximillians St. The Residenz Palace, and the Hofbräuhaus.

We take a somber moment at the Munich synagogue and Jewish cultural center, soon contrasted with Assam’s fine example of baroque architecture. What has this got to do with helium and hydrogen? Come along and find out, before we walk in the footsteps of the aristocracy through the courtyards of the Residenz. The adjacent Maximillian Street is one of the richest shopping boulevards in the world, and even window shopping is a fun activity in Munich. Here we make a note of the location of the world’s most famous brewery, the king’s own Hofbräuhaus, one of the things to do in Munich you will have on your list.

How big a world headquarters can you hide behind an elegant square named for the ruling Bavarian Wittelsbacher family? Commerce and technology are perfectly blended with royalty and tradition. The tourist in Munich may not want to brave the cold water or put this on your list of what to do in Munich, but it has become one of the sights of Munich to see expert surfers ride the Eisbach stop wave, tapping their boards if it’s time you got off, or if you performed some cool moves.

After following the route of Hitler’s beer hall putsch, the visitor in Munich can take the Viscardi alley used to avoid the guard placed at the site of his arrest. The bombastic House of Art glares at us from across the street, but artists of the world had the last laugh at Hitler’s expense. Or, did they? We will look up at the ceiling of the portico, and you decide.

The English Garden in Munich

Now, if you are the Bavarian king and want an English garden, who do you hire for the job? You’ll be very surprised, but also very impressed when visiting this beautiful tourist attraction in Munich as we stroll for about 30 minutes through the English Garden, past the Japanese Tea House, the Greek Monopteros, and the Chinese Tower, site of Munich’s second largest beer garden. After this tranquil experience in Munich, get your guide to point out the famous Lake House with its lively yet shady beer garden set right on the water. A quiet afternoon here is certainly on your list of what to do in Munich.

Schwabing and the University of Munich

The Bohemian Quarter, and tragedy and triumph at the University

Continuing our walking tour of the sights Munich, we leave the English garden in Schwabing to four imposing statues representing the power of nature as the background to a story of tremendous commercial success. The visitor to Munich will hear how this story continues in the most unassuming way right on the next block. At the university, get your guide to tell the tragic story of how the Nazi resistance by Sophie Scholl and the White Rose Society is remembered by an inlay in the pavement, a bust in the atrium, and of course fresh white roses. On a brighter note, visiting Munich must include mention of some of the giants of science and literature on the faculty of the University of Munich who won Nobel prizes.

The King’s Square and the Gallery Quarter

Finally, our sightseeing walking tour of Munich shows us the transformation of the Königsplatz from Hitler’s parade ground, to parking lot, to one of the finest Gallery Quarters in the world. When considering what to do in Munich, the visitor in Munich should include the Art district, an important tourist attraction of Munich. The last sight on our walking tour of Munich is the Palace of Justice where the Scholl siblings were summarily tried. We return through the Karlstor medieval city gate after a thousand year adventure of history, art, architecture, tragedy, innovation, and atonement.

Return in time for the Carillon, a Beer Hall, or climb St. Peter’s Church Tower

This completes our walking tour of Munich, having seen the most important sights and major tourist attractions in Munich. Along the way and at our rest stops, see if you can get your guide to pick up the conversation where you left off with your taxi driver – health care, education, taxes, and life in Germany – in a light-hearted and open-minded kind of way. We may even do some language laughs with those impossibly long German words, like Siebentausendzweihundertvierundfünfzig (the number 7,254) but if not, everybody can say “Prost”!.

Come with us on our sightseeing walking tour of Munich for an adventure of discovery and delight!

What to do with time in Munich? Besides our standard Walking Tour of Munich or your own Custom Munich City Tour that visits the best sights of Munich, consider getting outdoors into the Alps or an excursion in Bavaria. Day trips from Munich include a hike or walk in the nearby Bavarian Alps, or a walk-and-water day at Lake Starnberg including beer garden. Get your guide for what to do on a spare day in Munich to inspire you with our unusual Gardens of Peace tour, or visit sites on our Celtic Heartland with museum and oppidium tour. In winter, guided skiing with ski rental from Munich for the day to Garmisch, or a winter hike or walk in the pre-Alps near Munich.

Please Fill up the fields below